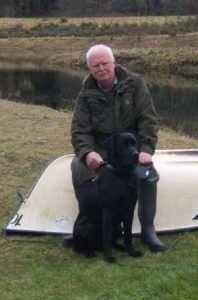 Fishing and I go back a long way, indeed back as far as I can remember. Come the month of May every year my father would ready his fly fishing gear and head west to fish Lough Corrib or Mask. I remember the postcards and phone calls arriving home reporting on the weather conditions and trout catches of the day.

When my brothers, Rob and John were old enough, my father took us all fishing, set us up with rod cork and worm and let us loose on small rivers and streams where we caught small but very energetic brown trout.

It wasn’t until after my teens that my interest in fly fishing was reawakened with trips to the lakes in the West and the rediscovery of the scenic beauty and the joy of being on the lakes fishing for beautiful wild brown trout.

During the late seventies, the Duff family, acquired Tinnahinch estate with the river Dargle running through it. That was when my interest in fly fishing and river management really ignited.

The river was badly neglected; bushes and trees overshadowed the river in many places and so began the ongoing maintenance work. Bushes were cut, islands were removed with a wheel barrow, stones and rocks were sought wherever they could be found and transported into Tinnahinch. Weirs and groins were all built by hand, which gave a better depth of water for fish and fly.

As the seasons rolled by sea trout and the occasional salmon began to hold in the pools created and so it was that with help from friends fly fishing was established on the river. Professional fly fishing instructors were hired in to teach the art to beginners and those who wanted to improve their technique. Here is where I watched, improved, practiced and honed my own skills and also learned to tie flies.

The specialised nature of fly fishing for sea trout at night on the River Dargle and the decline of sea trout numbers prompted the idea for a trout fishing lake. Eventually, after many years planning and hard work, permission was granted and my dream became a reality. Planning permission was also granted for a large log built club house situated in this idyllic setting which is used for small functions, corporate outings, workshops, etc., as well as housing a tackle shop.